Yesterday, January, 30th, Jeremy Lupp and I skied the coveted Apocalypse Couloir off of Prospector Peak in Death Canyon. Jeremy suggested this route to me last Friday after he had got a glimpse of it while ice climbing on Prospector Falls the day before. The Apocalypse Couloir is truly a Teton Classic and one of the steepest and most hazardous ski lines in the range. We started out from Jackson a little after 7:00 a.m. and were skinning from the Death Canyon trail by 8:10. It was a relatively warm morning and we made quick work of the well laid skin track past the Phelps Lake overlook and into the canyon. My first glimpse of the couloir was a memorable one, it looked steep…very steep. While I have spent much of the past two winters ice climbing in Death Canyon I had not known of this ski line until recently. Shortly after 10 a.m. we were making our way up the cone beneath the Apocalypse.

It was warm but the narrow NE facing couloir remains well shaded. After re-hydrating and refueling at the top of the cone we began the long bootpack up the couloir. The snow was firm in some areas and deep powder in others which made for quite a workout. After an hour and 1,000 feet of elevation gain we had reached the “crux” or narrowest choke of the couloir, only 4 feet wide, icy and about 60 degrees. After navigating the crux we continued up the couloir and then turning left to climb the South Fork of the Apocalypse.

At approximately 1:15 p.m. we were kicking out a ledge large enough to take a break and put on our skis for the exciting descent. The air was crisp and cold in the shade of Prospector Peak above as we discussed our ski route and how we would navigate the narrow crux. We decided that we would have to remove our skis, stow them on our packs and downclimb the precarious ice choke. With the decision made and nothing left to do but begin our ski descent we set off down the couloir. The snow was well condensed and stable which eased our minds of the potential for avalanches but also made for fast, exhilarating turns. Jeremy stopped a couple hundred feet above the crux of the route to stow his skis before the couloir rolled over to steeper terrain. I decided to leave my skis on and gingerly make my way to just above the narrows. This proved to be much faster and surprisingly comfortable as I had no problem keeping an edge on the softening snow. A quick downclimb of 40 feet or so lead me below an ice bulge where I could kick out an area to once again put on my skis and continue the descent. Jeremy was soon reattaching his skis as well and I handed him the camera to video my turns down the steep, narrow couloir. It was by far the most aesthetic line I have ever skied, the beautiful blue ice on my right playing contrast to the monochrome granite walls on my left. Half way down the couloir I stopped at a small alcove where I yelled up to Jeremy to start his descent. Even on Teli-skis Jeremy made great turns down the tight chute and stopped next to me for a minute to share his jubilation at skiing the beautiful line. The walls of the couloir then widened and eventually gave way to the cone below Prospector Falls and the Apocalypse. The snow was warm and soft and we were soon across the creek. We then paused to gaze up at our accomplishment, a tiny sliver of snow tucked in the mass of rock of Prospector Peak. 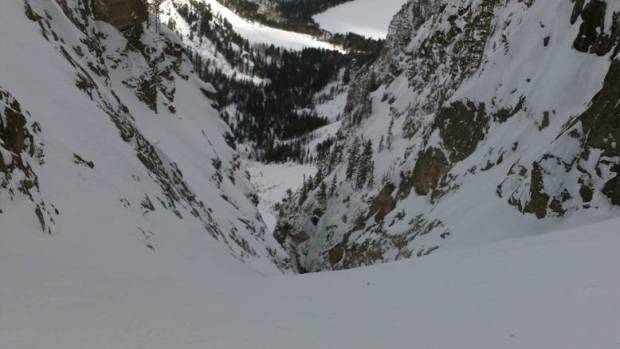 The skiing out of Death Canyon on the hard skin track made for a quick return to the trailhead. Shortly after 4 p.m. we were honoring our successful day in the park in the usual manner, with cold beer and whiskey at Dornans, then burgers with my girlfriend Natalie at the Cadillac Grill. A perfect day in Jackson Hole.

One thought on “Apocolypse Coulior”

Custom skincare prescribed just for me, without a trip to a dermatologist? It’s a dream! 💛These were sent complimentary via @influenster 🖤 Check out my full review of @agencyskincare on my blog 💛 Link in profile