We met at my house at 4am and drove up to the Bradley/Taggart trailhead (the road from this point through the park is only open to bicycles, runners, in-line skaters…etc). From the parking lot we jumped on our bikes and rode the couple miles to the Lupine Meadows turn off. It was a very cold ride and we had to stop a couple times to warm our hands. There was no moon and the stars were absolutely spectacular! At the Lupine Meadows turn out we locked up our bikes and made our way on skis across the snow covered meadow below Teewinot, looming 6,000 ft above. Skinning up the lower east face was less difficult than I had expected, the snow had firmed nicely with our recent abundant sunshine and lack of snowfall. By sunrise we had progressed up to 8,000 ft and took a short break to watch the sun crest above the Gros Ventres and devour a couple protein bars. Shortly after 9:00 am we reached the “Apex” where the trees give way to the steep, rocky alpine setting of the upper face. At this point the terrain became too steep to climb on skins, so we would have to take off our skis and boot pack the remaining 2,800 vertical feet.

We took a short break at 10,200′ to refuel and determine the snow conditions. We found the snow to be stable enough to climb and ski but the snow on the upper face of the mountain was far from spring conditions. The temperature above 10,000 feet had yet to reach levels that would produce good corn skiing. It was an utterly exhausting effort breaking trail on the 50 degree slope, I had to stop every hundred feet to catch my breath and wipe the sweat from my brow. At 11,500′ I reached The Choke, a three and a half foot wide vertical section of ice. I removed my ice tools from my back pack, stowed my ski poles and began to climb the extremely precarious section of ice. Above the choke lay a steep snow field for 500 ft up to The Notch and more exhausting climbing. Reaching the Notch at 1:30 pm I began my descent, the whole east face of Teewinot laid out below me, a fall or mis-step could mean complete disaster. A few years ago a guy fell skiing this route and tumbled 2,000 feet to his death. I would have to remove my skis at the ice choke and down climb with my crampons and ice tools to get back on to snow. After this down climb was over however, there would be no more obstacles, a continuous 4,500 vertical feet of steep untracked snow. The snow was fast and crusty and my weary legs fought to maintain control of my skis. It was terrifying, exhilerating and liberating all at the same time! Jeremy waited above the Apex for me to meet him and as I skied to his position, with the biggest smile on my face that I can imagine, we exchanged words of our amazement at what we had just skied. We then made our down the remaining 2,500 vertical feet of the lower face. What we found was the most amazing corn conditions I have ever skied and one of the best runs I have done all season. We made big easy turns through the wide open trees and gently sloping faces that basked in the sunlight. At 4 o’clock we reached the Lupine Meadows turnoff were we strapped our skis to our backpacks and lazily rode our bikes back to the parking lot. Upon reaching the car we endulged in a couple cold beers and a pint of whiskey and stared up at our accomplishment as a great wave of quiet satisfaction washed over my body. 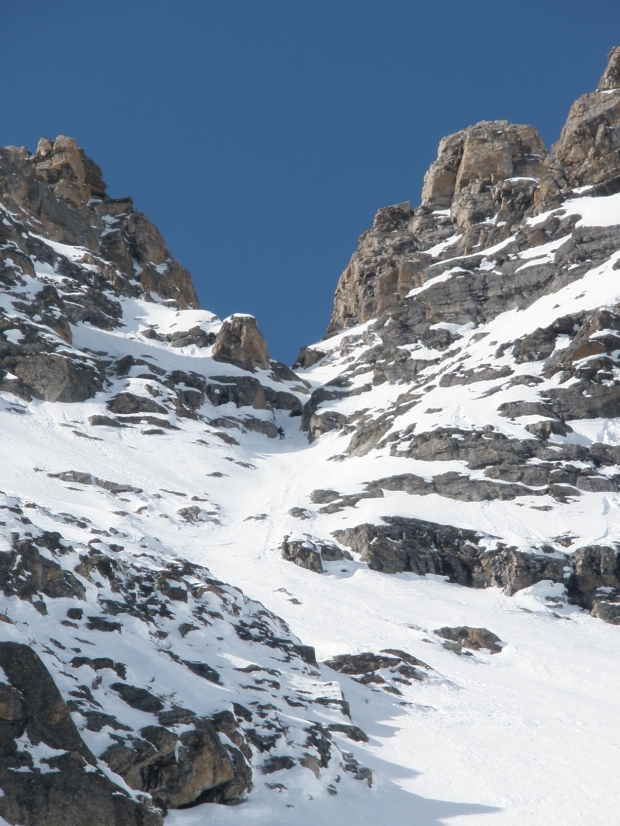