Let’s get right to it, shall we?

So. The last day in Seminyak I began to get a bit of a sore throat, but only mildly and in the AM. I thought nothing of it and just hoped it would go away. Well, it did not and cold symptoms began to progress.

The day we drove to Lovina was an uneventful one. I had gone through about 9829q8 Kleenex and now had to endure a 4-hour car ride through the INSANELY windy roads of Bali. We managed a quick stop off at another famous Balinese temple, called Ulun Danu which is situated on a lake. It’s breathtaking. 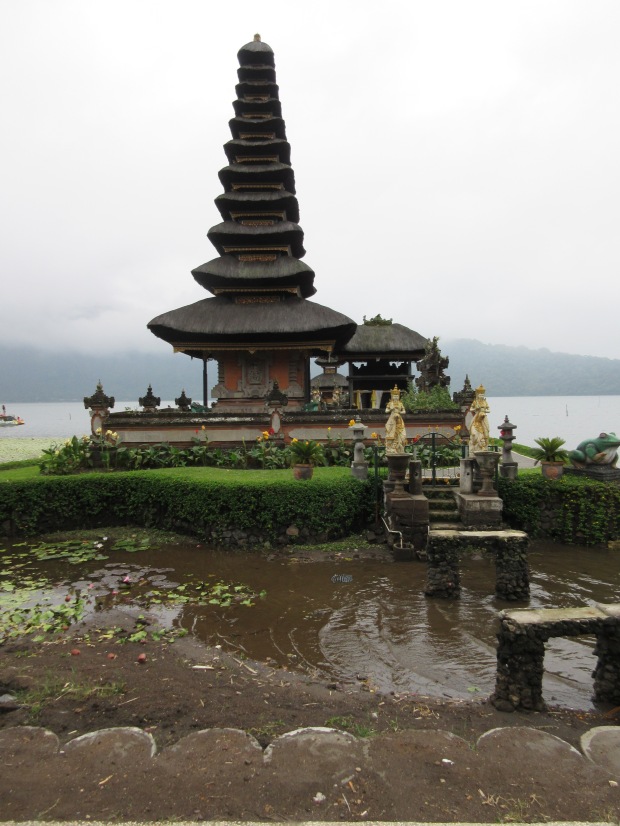 The gal on the left is FIERCE

Once we were up and over the mountain, we finally arrived at our destination, The Damai. To us, this felt like the real “Bali” experience. Unlike being in Seminyak (a city), The Damai offered a tranquil, lush, zen-like setting for the remaining 6 days of our honeymoon.

Entrance to our villa 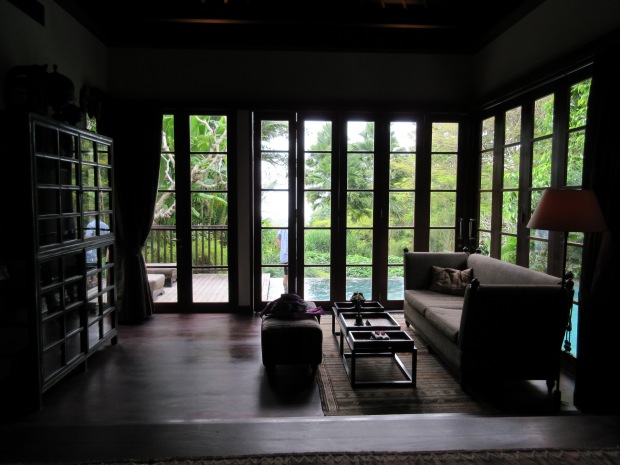 Ocean views in the distance!

I was exhausted from the car ride and we were both famished so we immediately had his and hers lunches of club sandwiches and I hit the hay HARD until dinner time. I could have smacked myself for not bringing any cold medicenes. Y’all know I’m a self-confessed pill popper, so it would have been nice to have a little Sudafed, or at the very least some Nyquil. Luckily, I had some de-contestants which helped a little.

The next morning we made our way to breakie. 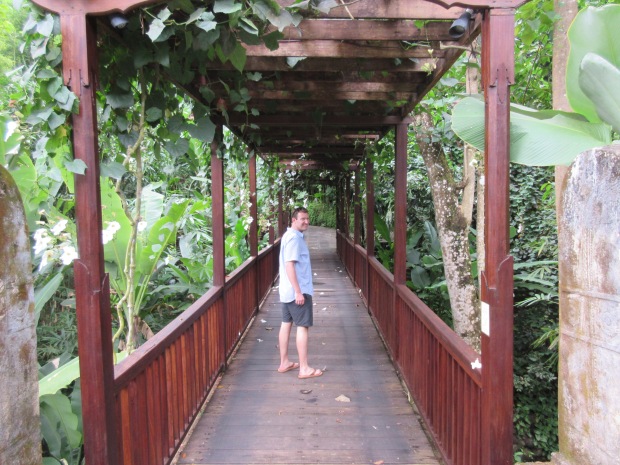 They grow their own herbs, a lot of produce and all the grass is hand cut 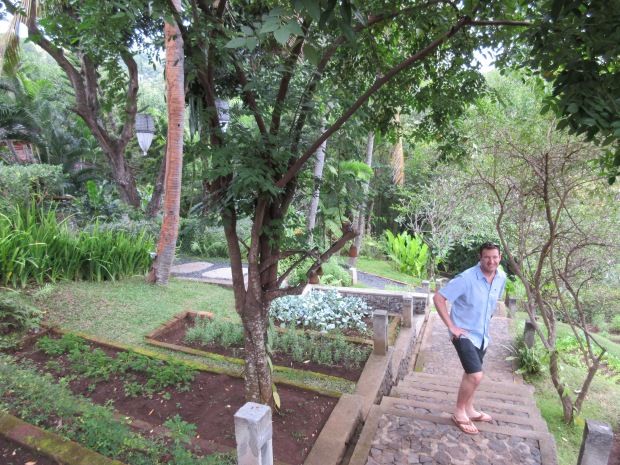 Breakfast was also included in the price we paid for the room and the spread was utterly fantastic.

To start, they brought coffee, juice and an array of local fruits. I was instantly repulsed at the banana (obvs) and that sliced open thing with gooey seeds in the middle? I couldn’t do it. Any of it.

But then. All of THIS came:

In addition to this smorgasbord was ALSO our full-sized entrees of food, my favorite being their pancakes…

Words cannot describe how much I loved these crispy-on-the-outside, soft-on-the-inside discs of unadulterated buttery bliss. Our breakfasts each day EASILY tided us over through lunch and allowed me to look four months pregnant during our late-morning dips in the pool. 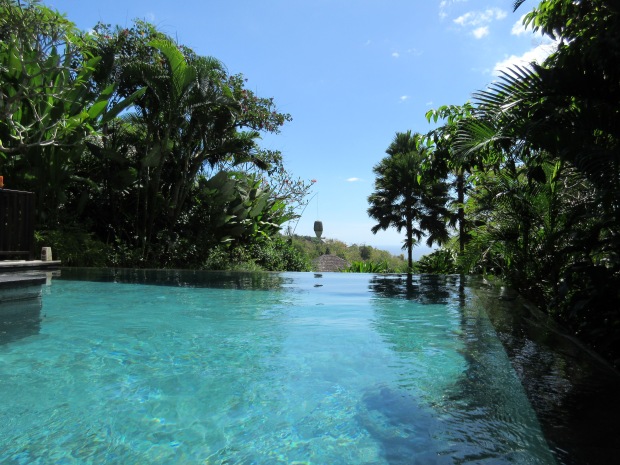 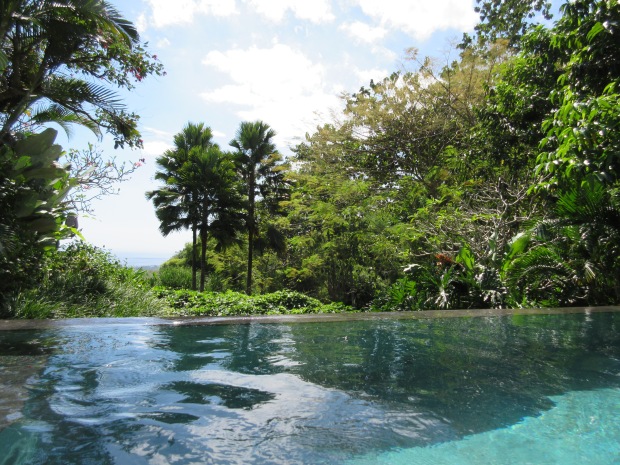 Before dinner that night, I drank an Asian Red Bull.

At dinner, we ordered a bunch of seafood and my prawns still had their little exoskeletons and those gross little legs and also, they were spicy. It just wasn’t my night. 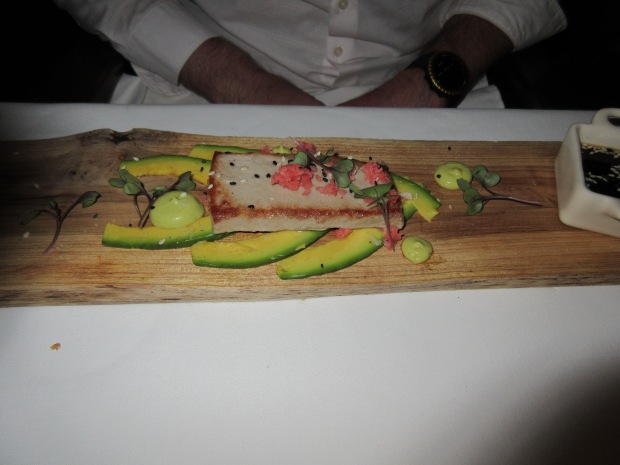 The next day, we decided to venture up to the “community” pool with the peasants. Hahaaaahhaaaaaaa. I put “community” in quotes because there are only like 15 villas in the whole place, so it’s not like it was a gross urine-infested cesspool like at Silverwood. 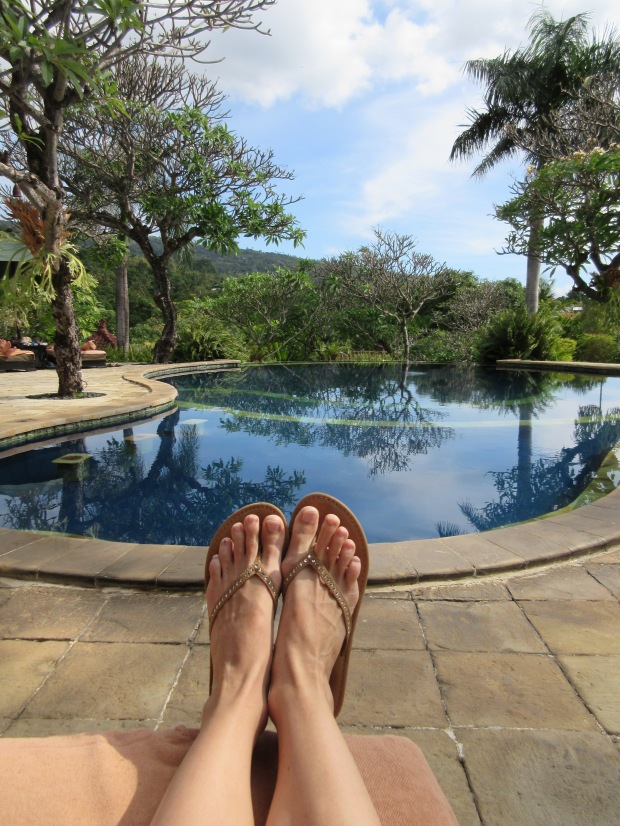 The next day we ventured into the little town of Lovina to watch the sunset. 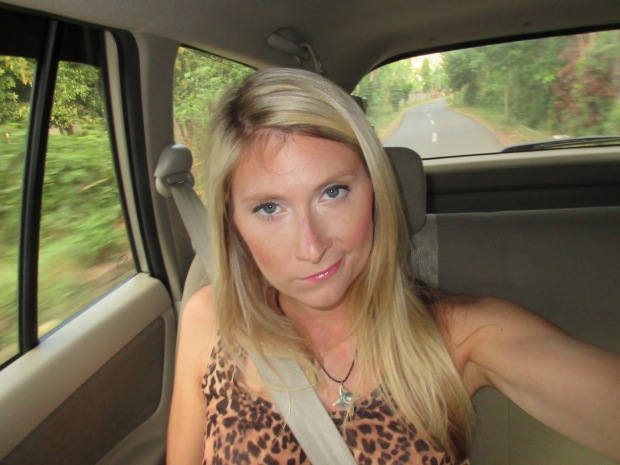 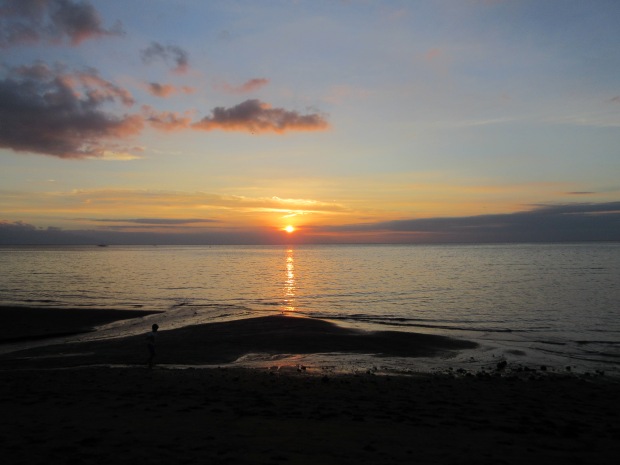 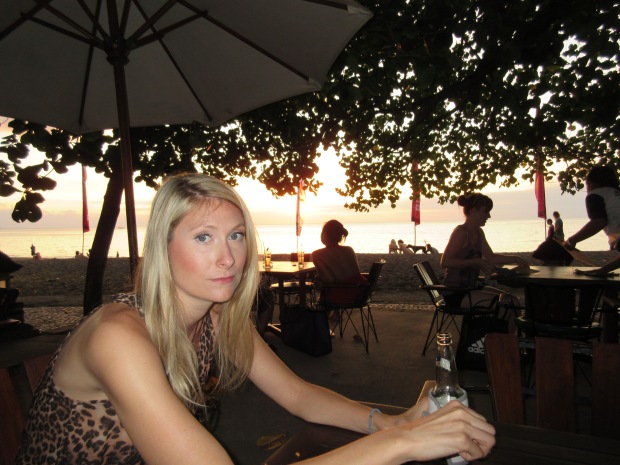 Then we headed out for dinner. 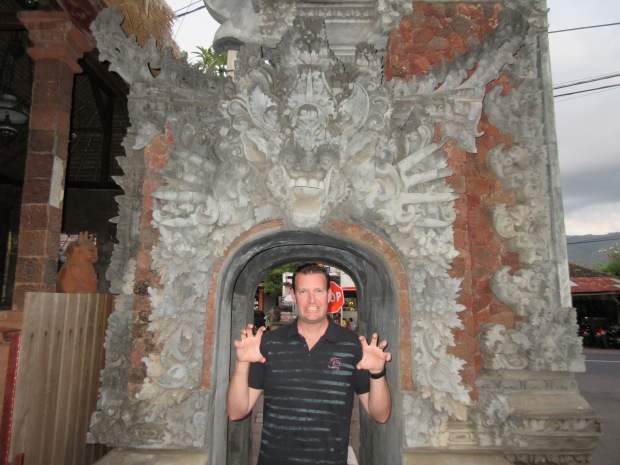 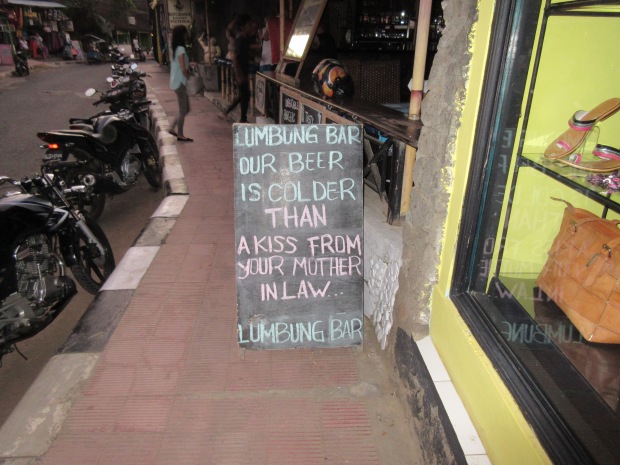 Bryan ordered some kind of curry and I decided on pizza after debating what would make me the least sick. 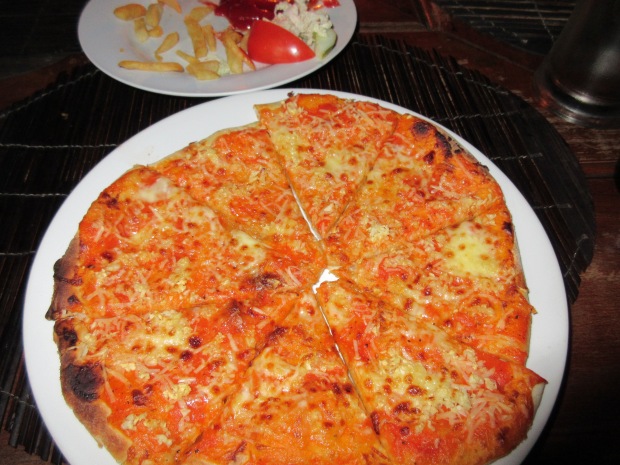 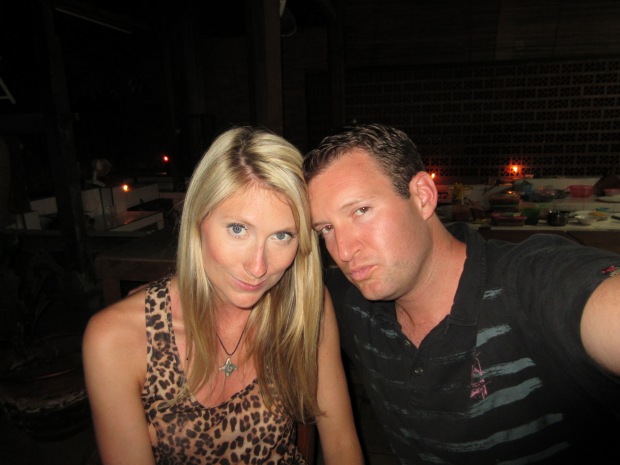 The next morning we woke up bright and early to go dolphin watching!

We ended up seeing a ton of dolphins but they are hard to photograph! Quick little buggers…

The only semi-useable dolphin shot

Later on, we changed and shopped around before we headed back to our room for a two-man pool party. 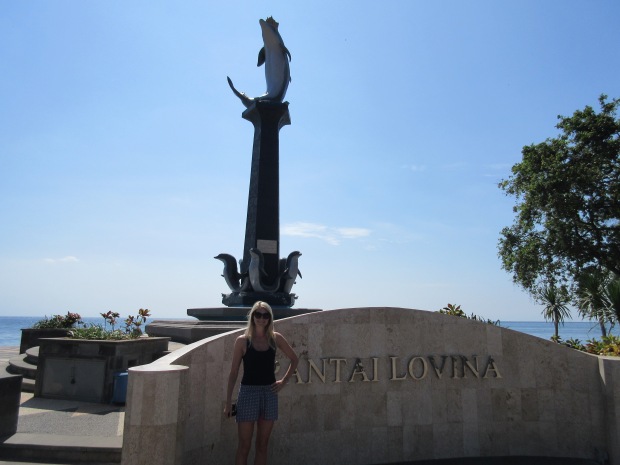 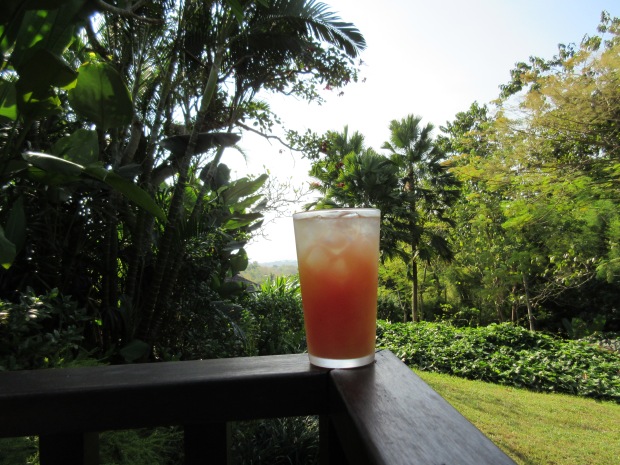 Whilst pool-partying, I asked Bryan if he enjoyed the Kelly Kapowski swimsuit butt and he did not know what that was. The horror!! So. I had to demo. 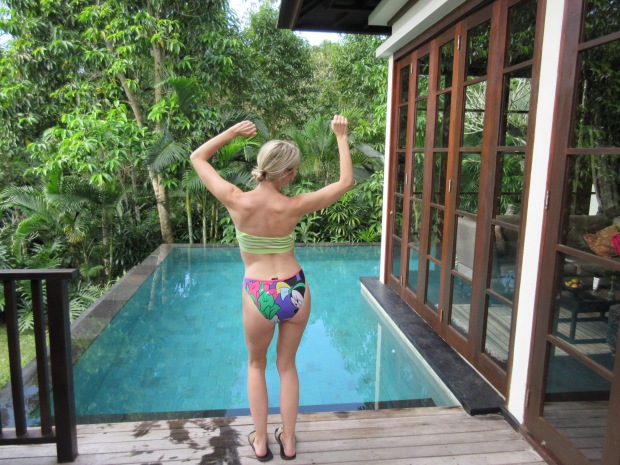 Bryan had fully caught my cold at this point and the next day it rained 😦 so obvs we laid on the couch all day and watched movies. Btw, The Count of Monte Cristo is SUCH a good revenge flick. So satisfying to watch.

Our last days were spent laying low because of Bryan’s worsening cold. 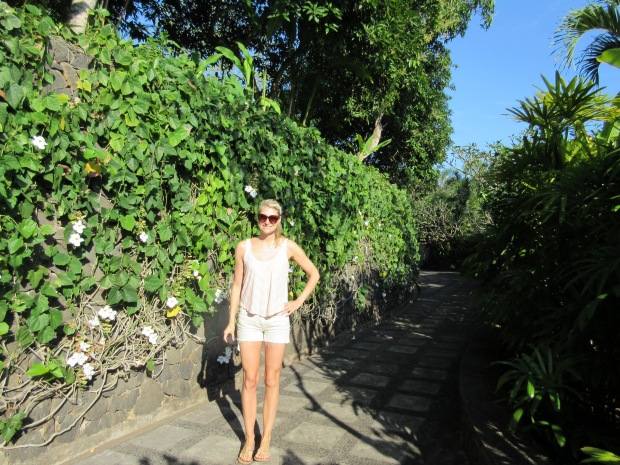 Our very last full day, we decided to go to Spice Beach Club and spend the day lounging under the umbrella.

And since we had sooo much fun during the day, we came back at night to watch the sunset and have dinner. 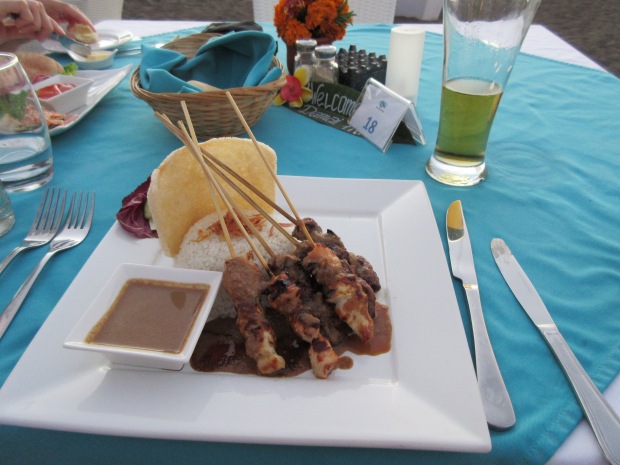 When we got back to our room that night, we had a special gift from The Damai for our honeymoon! 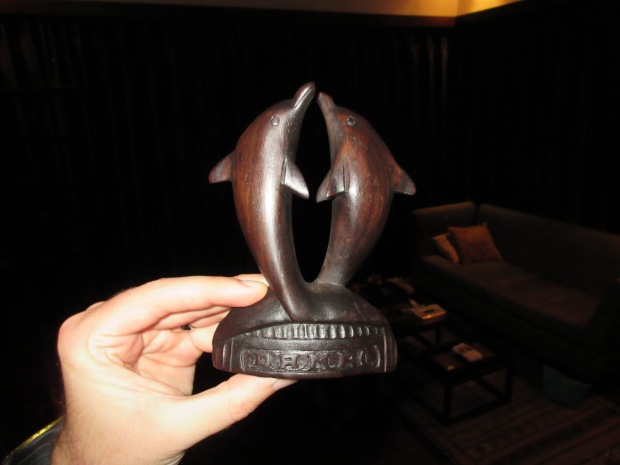 The next day, Bryan was still really sick with a horrible cough and we had the following ahead of us:

It was really joyous. The best part I’d say was the 12 hour flight for sure. Bryan woke himself up coughing every 20 minutes. We were directly across from the flight attendants little HQ and every meal was chicken + rice in a thick sauce By the time we got to Seattle, I was thoroughly thrown-off, hungry, and just haggard. We took turns driving and arrived around 10:30 PM.

I took a loooong, hot shower, used a ton of Lush, brushed my teeth with water FROM THE SINK and just soaked in all those comforts of home I had missed. By the time we fell into bed, it was near midnight and I gotta tell ya – climbing into bed that night had to be the most satisfying feeling EVER. You know the one. YOUR sheets, YOUR pillow. Before long, I drifted into a deep, peaceful sleep.

Traveling to foreign lands is tiresome. It’s expensive, uncomfortable at times and it is never “easy”. People keep asking us if it’s what we expected or if we wished we’d just gone to Hawaii. And while I LOVE me some Maui, I also think it is important (for me, at least) to push myself and experience these amazing cultures. All the head-colds, lizards and typhoid-infested drinking water couldn’t stop me from seeing everything there is to see and having a partner who feels the same way is the icing on the cake.