Yo yo yo internet “Finer Things Club” members!

Only 3 books have weaseled themselves into my hands over the past couple of months and frankly, I feel quite lazy.

1. Something Borrowed by Emily Griffin 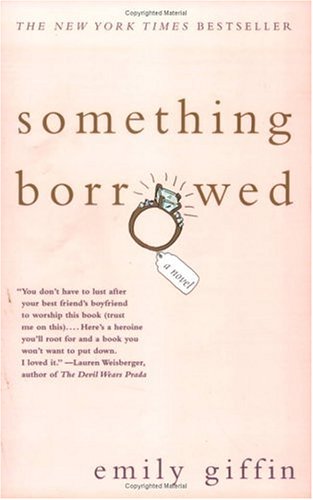 I am actually very surprised I haven’t read all of this author’s books. I mean, the covers are shades of pastels. The names are cute. Where have I been?My sister lent me “Something Borrowed” (haha) when I was in Kennewick for her wedding. Very appropriate. So basically, the main character has an affair with her best friend’s fiance. Part of me wanted to slam it down or throw it in the trash.  I was disgusted at the behavior of these two individuals, sneaking around and lying for their own mutual satisfaction. I felt for the best friend, despite the author’s attempts to make me hate her. However, like most things that come in baby-pink packaging, everything turned out okay. Apparently it is a movie too? Again – where have I been?!

2. The Midewife of Venice by Roberta Rich

Oooh, I luuurved this book. I read it in 3 sessions, over the course of probably 5 days. All I wanted to do was read this book. I thought about while pedaling nowhere on the elliptical. I had dreams about it. I found myself talking about it to the checker at Safeway. This book is set in Venice during the sixteenth century and follows a young Jewish mid-wife named Hannah. She is the best of her trade in all of Venice, but her faith only allows her to deliver other Jewish babies. Her husband is a prisoner in a foreign land and in order to pay his bail, she agrees to deliver the baby of a Christian noble-man’s wife. Each page builds in suspense and the every chapter quickly crescendos into the ultimate cliff hanger. Each more dramatic than the previous. My only wish would be that this book had a sequel.

I really enjoyed this cheeky little book about Paris and love. The book is split up in sections and focuses on the relationships of three french tutors and their pupils for the day. The characters are interesting and the dialogue is witty. Relationships. Sex. Affairs of the heart. (MUST LEARN FRENCH!)

So that’s it. Bryan and I leave for Hawaii in less than 48 hours where I will voraciously read on the beach in between sips of daiquiri 🙂

Mother’s Day Gift Guide! On the blog! Link in profile.